Modern instrument-based techniques used to monitor the environment only provide a tiny snapshot of the state of planet Earth. Direct measurements of temperature and tropospheric ozone extend back to the mid 19th century. Journal entries and historical writings can provide anecdotal evidence of the (localized) state of the planet back many centuries. However, the natural process of ice accumulation has 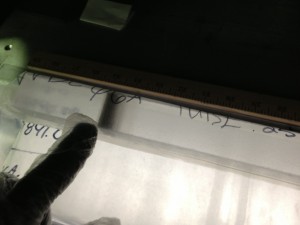 left us with an extensive record of Earth’s past that can reach back hundreds of thousands of years – a time capsule of sorts. The chemicals preserved in ice cores can provide a rich history of past environments unavailable to the modern instrumental record.  Our goal is to better understand the rich chemical record stored in ice cores. (Picture at right shows an ice core section with an obvious soot layer, deposited from volcanic activity).

The use of ice core analyses to reconstruct the environmental conditions of Earth’s past has led to a number of striking findings. The classic “hockey stick” trend (Mann et al., 1998) of increased temperatures since the onset of the Industrial Revolution provides a perfect example of how both the scientific community and the general public can benefit from careful and detailed examination of the ice core record. Long and detailed records of hydrogen and oxygen isotopes (a proxy for temperature), methane, carbon dioxide, a number of inorganic ions (e.g., sulfate, ammonium), and metals have been established and measurement methods continue to be improved to allow for analysis of smaller (or less concentrated) samples.

Organic materials preserved in ice have received less attention, however. This is due to several key issues including 1.) analytical methodologies are only now becoming sophisticated enough to detect the small amounts of carbon present; 2.) the organic matter does not exist as one single compound, but as potentially thousands of distinct molecular species; 3.) myriad sources of organic matter exist, both natural and man-made.

Previous work by our group has led to the development of electrospray ionization Fourier transform ion cyclotron resonance mass spectrometry (ESI-FTICR-MS) technique to analyze soluble organic materials in ice core samples. We can study, at an unprecedented level of detail, the organic materials preserved in ice cores.  We are now working to improve these methods and to apply them to a wide array of ice core samples … let’s see what we can find!

Why Should We Care???

Employing FTICR-MS for the study of ice core organic matter can provide a new understanding of the nature of this material, ideally leading to the discovery of multitudes of molecular species indicative of global change processes. Considering the fact that such an approach has yet to be attempted, it is difficult to predict how the molecular markers in ice core organic matter will scale with other change proxies (like isotopes, methane, etc). Thus, the proposed studies are of an exploratory nature … sometimes the most fun kind of science! Ultrahigh-resolution FTICR-MS now presents us with the opportunity to expand the wealth of knowledge that ice cores could provide for the glaciology, atmospheric, and climate communities.

We have already found evidence that atmospheric processing of organic materials during transport can lead to the incorporation of sulfur and nitrogen into the organic matter.  We also have evidence of microbial contributions to the organic material (yes, there are bugs in the snow and ice!) and active metabolism of the organics in snow and ice.  It appears that a host of biomarker studies could spring from this work. The field of ice core analysis could benefit greatly from the information and biomarker techniques already widely used in the organic geochemistry field. This marriage of two seemingly distinct fields is now possible due to advanced analytical techniques that allow for characterization of trace level organics at the molecular level in ice cores.

We obtain previously drilled ice cores, stored at the National Ice Core Laboratory (NICL, see left). Cores from Greenland, North America, and Antarctica have been analyzed thus far using FTICR instrumentation in collaboration with researchers at Old Dominion University.  We compare and contrast sites and ages of ice, for example  to compare northern vs. southern hemisphere cores. We also compare cores from high vs. low accumulation sites as well as coastal vs. inland samples.

Thanks for reading this far! Here is a picturesque photo compilation of one of our fieldwork sites (Barrow, Alaska) as a reward for reading to the end. 🙂